Prior to the 2013-2014 NBA season, SportVu tracking cameras were installed in all 30 NBA arenas. These six cameras would use cutting edge technology to track the exact location of all players, ref and the ball 25 times a second. This tracking data could later be used by teams, the league and privately run companies to provide new insights and analysis about the game of basketball.

Although most of this data is heavily guarded, a small portion is available publicly on NBA.com. It is our hope to use this data, combining it with the previously available play-by-play and shot chart data, to create a model that will give us the probability that a given shot will go in. With this model we will explore many insights that could prove valuable to fans and teams alike.

Some prior work in this area has been done, and it was these projects which partially inspired us to do this. These projects are, in no particular order:

The first type of data that we want to get is the SportVu tracking data for all shots. These shots are sorted by player and are located on the 'Shot Log' page of their player profile. 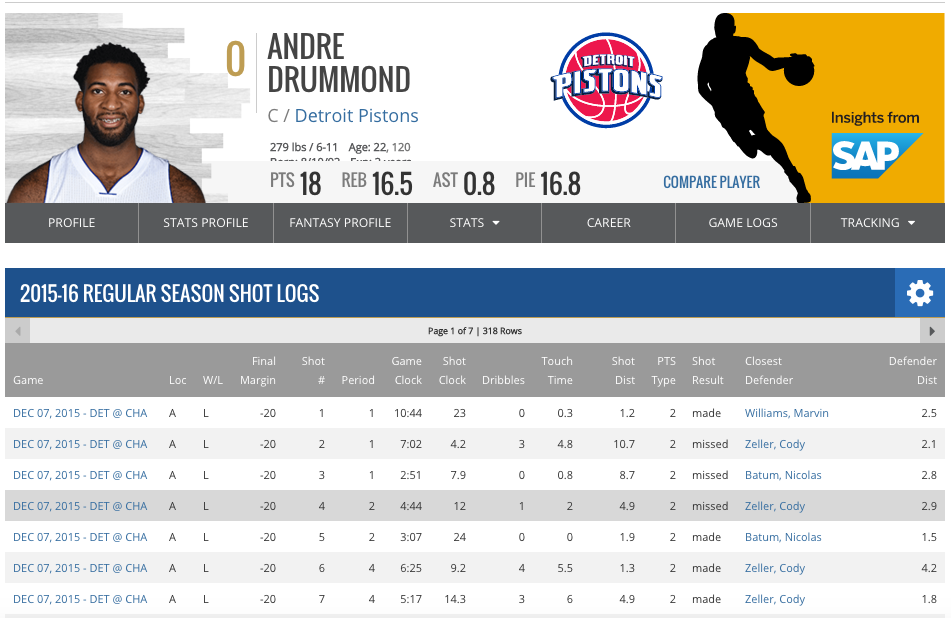 The next type of data that we need is the data from the NBA.com shot charts. This provides us with new information like the type of shot, general area (Right, Left, Middle) of each shot, and x,y coordinates. 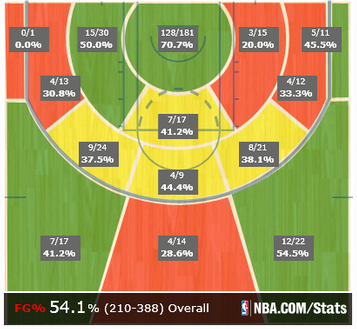 Finally, we have out last set of data, play by play for each game. This dataset will provide us with other key pieces of information we need for our insights that we don't already have, like score differential at time of shot, whether the action before was a turnover (to identify fast break opportunities) and the ids of the players who are on the court. 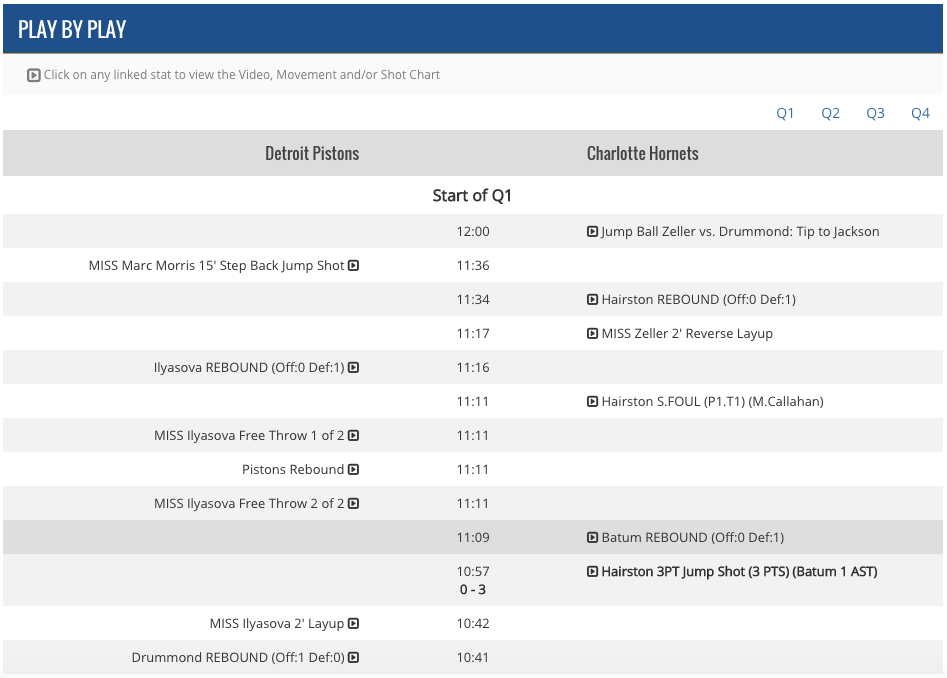 We built several models with the data, experimenting with logistic regression with l1 and l2 penalties, the best of which predicts with 65% accuracy whether a given shot will go on, significantly better than any publicly available model available thus far. This model allows us to see how different players perform compared to an average player taking that shot. This model takes into account the distance from the basket, the distance from the nearest defender, the type of shot, the amount time the player held onto the ball before the shot, and a couple other key variables that were captured by the NBA play by play cameras. Below is a chart of the key variables as sorted by feature importance from the random forest model that we built. 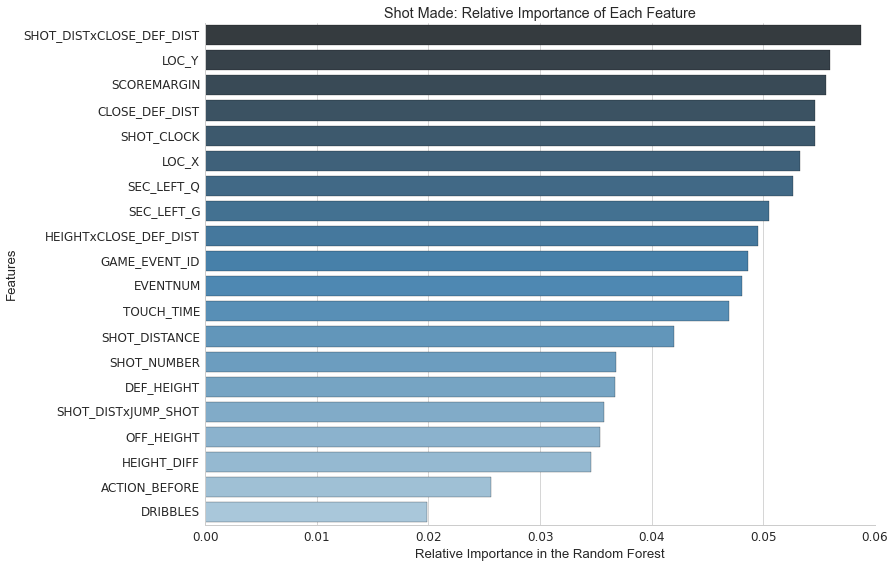 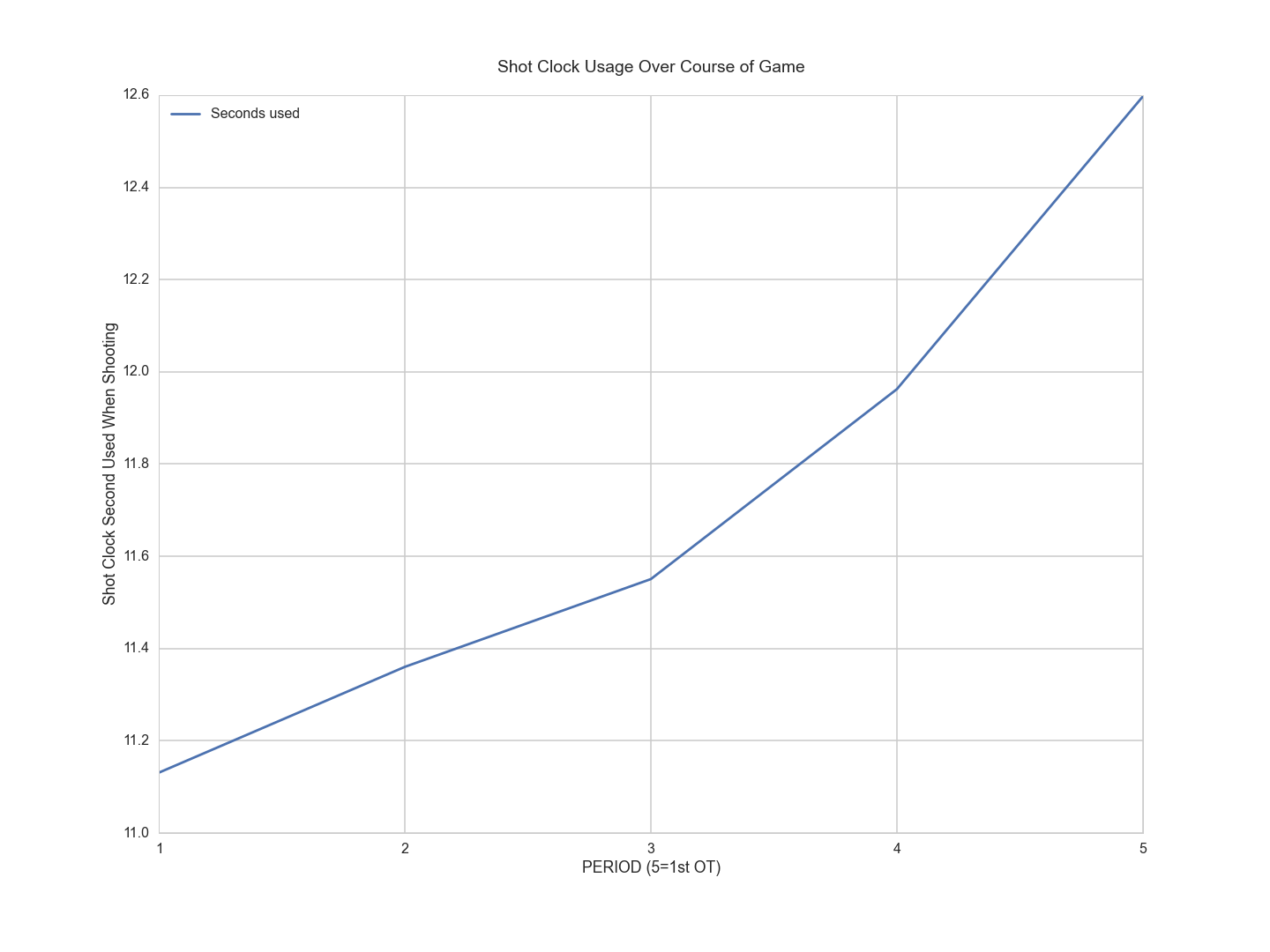 In order to understand what factors might cause a team to take longer to shoot every quarter, we broke down the time by quarter and by the current score differential for the shooting team. We hypothesized that teams in the lead might try to kill time and teams falling behind might try to shoot more quickly. This effect reveals itself in the visualization, but only for data from the fourth quarter. This makes sense however, because teams feel more time pressure in the fourth quarter than any other. 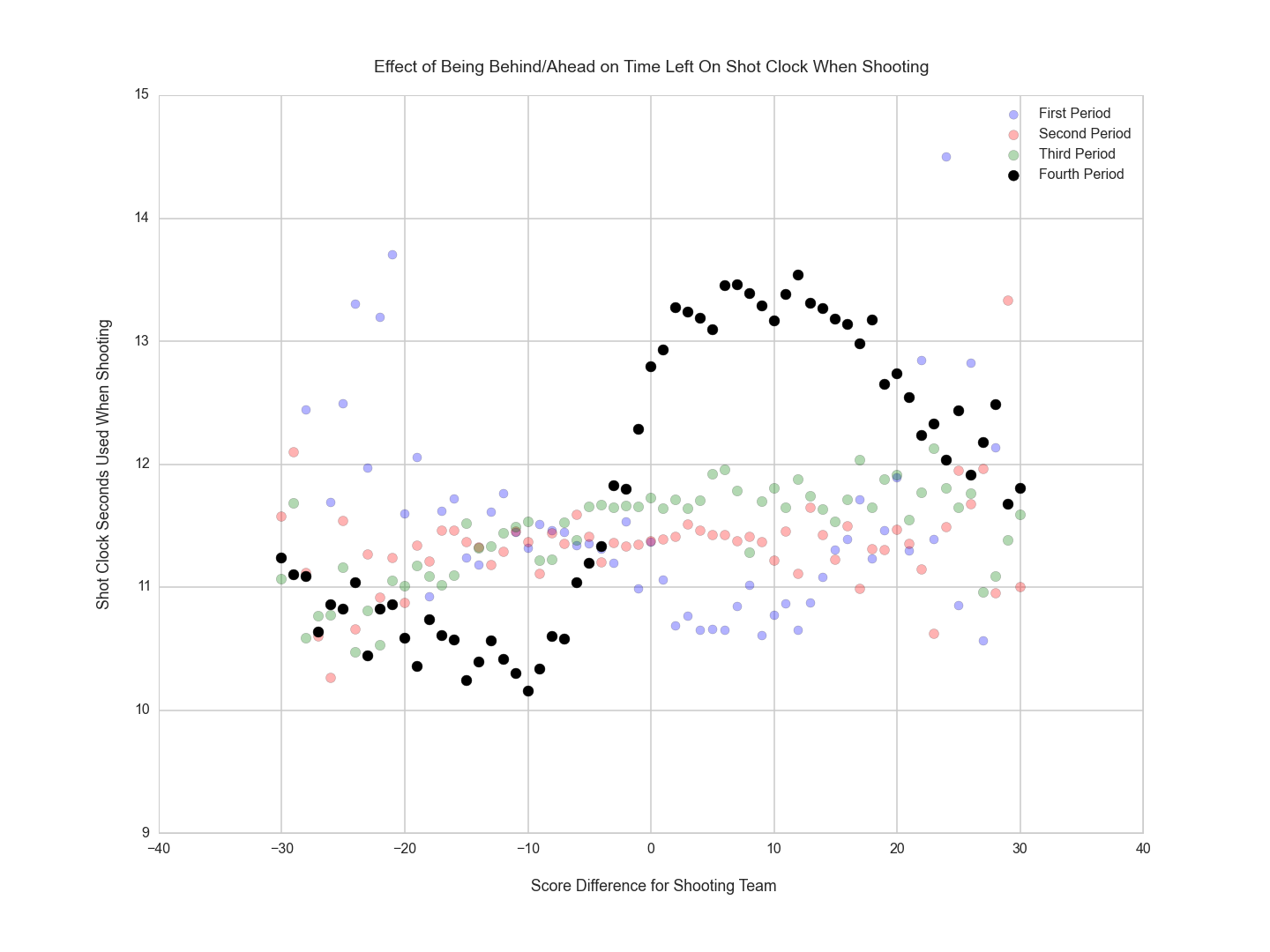 This next graph shows that the average probability of a shot going in decreases by quarter, likely for the same reasons teams take longer to shoot as the game progresses: fatigue and adjusted strategies. 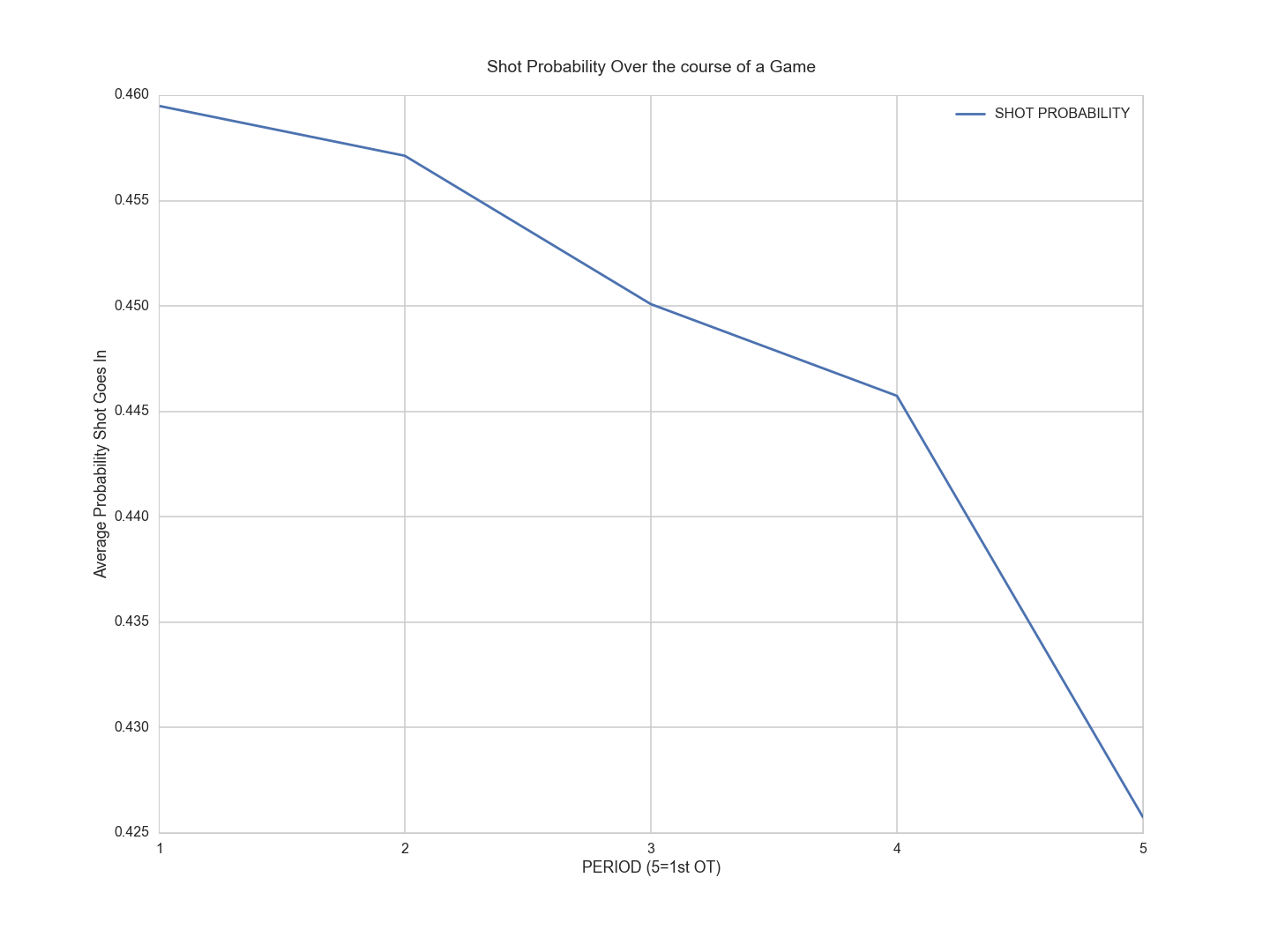 Of course, a player's expected points per shot is in turn affected by multiple things. There is the ability of the player himself to get good looks, there is the ability of his teammates to get him good looks, and then there is the ability of the defense to stop him from getting good looks. Running a massive ridge regression with the expected points for a shot as the dependent variable and then dummy variables for who is on the court (three possible types: one for the shooter, one for each player on offense but not shooting, and then one for each player on defense), we can get three coefficients for each player: their ability to get good shoots, their ability to help their teammates get good shots, and their ability to prevent opponents from getting good shots. Below we have plotted scatterplots reflecting a few of those stats.

Ability to get teammates good shots vs. Ability to prevent opponents from getting good shots

Ability to get teammates good shots vs. Points Above Expected

Please feel free to contact us with any questions/comments!